Driving  from Death Valley to Las Vegas, I pass through the strange town of Pahrump, NV.  As I approach one of the town’s main intersections, I spot a structure that appears to be made out of spare parts from the toy castle hotel where I’m staying in Vegas (The Excalibur). As I pass by I look over and see the sign: “The Kingdom Men’s Club” (!).  I quickly decide to make a stop in Pahrump.  →

I park across the street in the lot for the podiatrist and Remax Realty. The Kingdom appears to be open for business, but just a few cars around.  I’m shooting it, but cautious.  It looks like the kind of place Tony Soprano would hang out if he was in town. I’m trying to avoid detection by the video cameras outside, so I don’t go as close as I might like.  One can only imagine what goes on inside the place. → 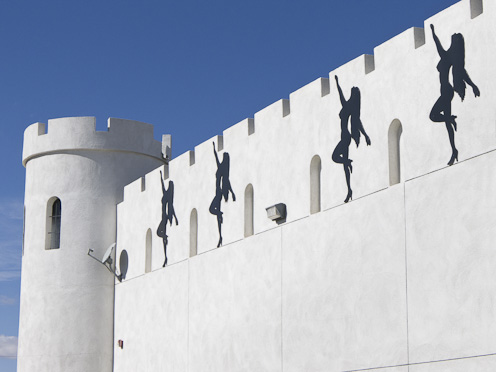 As I continue shooting, my feeling of amusement gives way to one of uneasiness.  The Kingdom is creeping me out, I admit it.  Perhaps it’s the site, Pahrump’s relative isolation in the Nevada landscape, etc.  I wonder if the Kingdom thing goes beyond just the architecture.  I can’t help conflating the cheap architectural fantasy with the actual place and what I imagine to be the very dismal proceedings within. In the end I am left with a vague feeling of shame for everyone involved.  Should this ‘everyone’ include me too?  ◊

2 thoughts on “I Have Seen the Kingdom”